McVities You Must Be McJoking

You are here:
Uncategorized 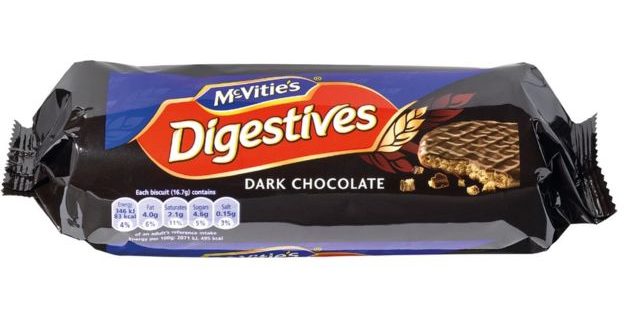 McVities the famous bakers and biscuit maker has joined the notorious list of companies that sneakily reduced the size of their products. Shrinkflation as it’s become known has seen a host of companies very quietly reduce the size of their products, hoping that nobody would notice as we’re all talking about Brexit.
Funnily enough, this doesn’t go hand in hand with a reduction in price. Incredibly, according to Which magazine, prices actually increased too!. The humble and best loved digestive biscuit is to be old in smaller packs from February. The giant 500gram pack be reduced to a mere 400grams – or 7 biscuits fewer. The 20% reduction will be offered for a 10% reduction in price. Yes the maths isn’t quite right there. !
That’s still an improvement from when they reduced the size of the chocolate digestive pack in summer but increased the price too. There are few companies who have a loyal following and would never ever think of swapping to a different brand. Mainly because other brands are unable to produce the goods of the same quality. Think Heinz Ketchup v Supermarket own label, or Coca Cola v Virgin Cola they’re just not the same. It seems that know this, it’s a situation ripe for taking advantage off!
We’ve discussed on this blog before many companies are feeling the bite ( no pun intended) with rising costs all round, but is this really the way forward?. Surely being honest with their customers and raising the price would be a better option?, rather then this sneaky way of saving costs. Explaining the reason why would be the most reasonable solution as most folks would understand.
We sell and deliver cakes across London it wouldn’t make sense to suddenly send smaller cakes out and then point the finger at higher costs. The price of butter is only just coming down after highs last year – lots of our suppliers raised their prices. If costs are going up for McVities they’re going up for everyone else too. We all notice, so are more forgiving. Doesn’t mean we like it when that slice of cake that was £1.50 last week is now £1.75
List of Shame …
Andrex four-pack toilet roll was cut down from 240 to 221 sheets, a reduction of 8% with no change in price
Sensodyne Total Care Extra Fresh toothpaste decreased in size from 100ml to 75ml, a 25% reduction with a drop in price from £3.60 to £3.49. That’s not 25% !
Creations Pure Premium Orange & Raspberry juice from one litre to 850ml. 15% decrease with 8% decrease in price. …sneaky !
McVitie’s packet of dark chocolate digestive biscuits shrunk from 332g to 300g, a 10% reduction -The biscuits were sold for £1.59 before they shrank and were spotted at £1.69 after, according to Which?
Whether you sell cakes or cars, being open and transparent with your customer – yes that person – the one that ensures you have a business in the first place – at all times is really the only way to operate, especially with intense scrutiny online , reviews , social media postings you will be exposed.
Category: UncategorizedBy xandaFebruary 2, 2018
Share this article
Share on FacebookShare on Facebook TweetShare on Twitter Pin itShare on Pinterest Share on LinkedInShare on LinkedIn Share on WhatsAppShare on WhatsApp

Would You Spend Valentines Night Eating Cakes And Pasties At Greggs ?
February 6, 2018

More Consolidation In The Cake Industry, Could There Be More Ahead ?
February 1, 2018